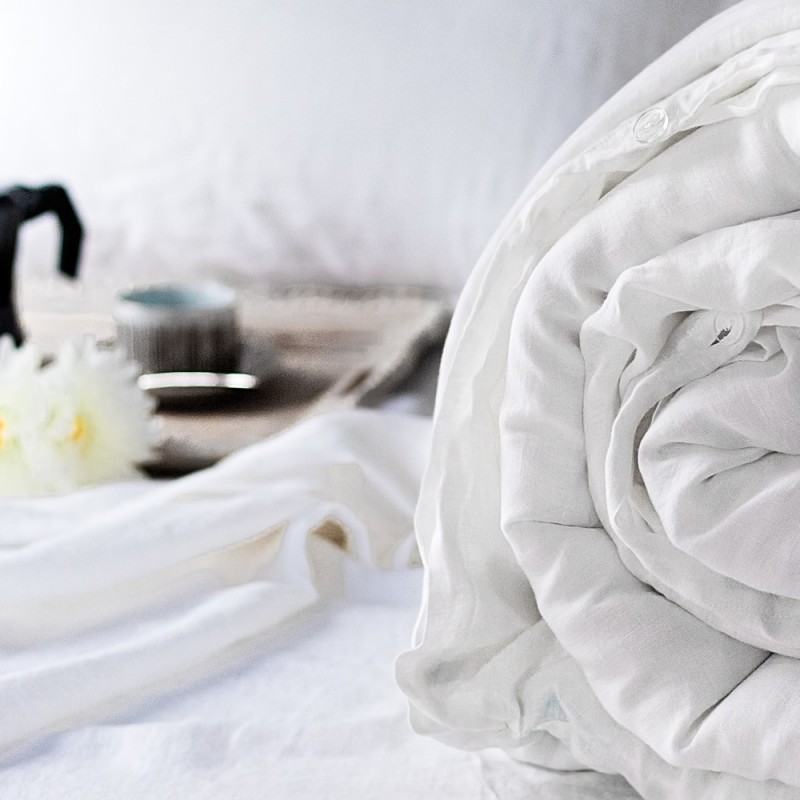 Luxury linen duvet cover with a button closure at one end of duvet cover. Part of the traditional Atlanta range of luxury bedding. White for a timeless look. Choose the size for your bed, if in doubt check out our bed-size chart.

We present our Atlanta collection which is made in Portugal from 100% linen. The linen duvet cover uses an all embracing, fresh, linen that is perfect for using all year round. Linen has properties that generate a sensation of freshness in the summer months and a feeling of warmth during the colder winter season. The ruffled style of linen creates a simple rustic look which give your bedroom an elegant and simple appearance.

The fabric used is 100% natural washed linen. Historically this is one of Nature’s most used natural fibres and has been a key part of the textile industry for centuries. The fine threads that make up the linen fibre are extremely lightweight, compared to the larger, heavier cotton threads.

The design of the Atlanta duvet cover follows a simple and plain, yet sophisticated style, without borders or adornments. This simple and traditional cut is what makes the linen range so elegant and special.

Characteristics of the linen duvet cover

The linen of the Atlanta range allows your body to breath and because the linen is natural and free from allergens it allows you to have a more relaxed sleep.

The ability of our linen duvet covers to absorb humidity is a special characteristic of linen and is particularly helpful in both cold or humid climates. The use of linen is recommended in homes across the world. Wherever you are living, high quality linen bedding contributes to a good night’s sleep.

Write a Review
Based on 9 reviews -

Yes, it really does feel cooler!

I was unsure when I ordered the cover but it has proved very pleasing. The cover is cool and very comfortable. Ordering was straightforward and delivery quick. I am happy

This duvet cover is so incredibly soft, and it?s the perfect colour white. Really brightens the room

Very beautiful, I saw it on Insta and thought it would be a good idea to use for my bedroom.