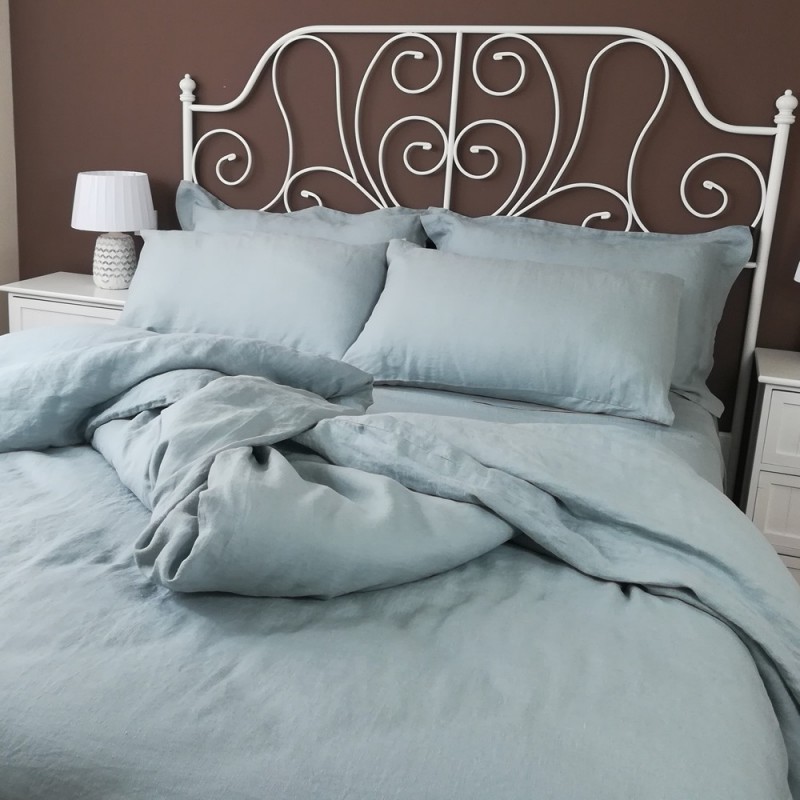 Luxury linen duvet cover in a pale blue-grey, slate colour, with a button closure at one end. Part of the traditional Atlanta range of luxury bedding in a soft slate colour. Choose the size for your bed, if in doubt check out our bed-size chart.

Made in Portugal from 100% linen is our Atlanta Colours collection. This design is a very pale blue, almost grey hue, which we have called Slate. The soft slate linen duvet cover is carefully made using pure natural linen that can be used on your bed all year round. Linen has marvellous properties that create a pleasantly cool effect during the summer and generates a comfortable warmth during the colder winter and autumn months. The ruffled effect created by linen gives your bedroom a simple rustic feel which is both stylish and elegant.

The pure linen used by Connie Home for their bedding is 100% natural washed. This is one of the most frequently used of the earths natural fibres and has been a major factor in the textile and bedding industry for centuries. The soft and fine threads that make up the linen fibres are lightweight, particularly when compared with alternatives such as cotton which has a heavy, larger thread.

The design of the soft hued Slate, pale blue-grey Atlanta duvet cover follows a traditional style, in that it is without any borders or decorative additions. This simple and classic design is what makes the blue-grey slate linen range have such an elegant and modern feel.

Practicalities: The lower part of the slate linen duvet cover is where you find the discrete button style closure, which allows for easy insertion of the duvet pad. It couldn't be easier to wash the duvet cover and the natural linen qualities remain despite frequent washing.

Advantages of linen for your duvet cover

One of the main advantages that linen has over other textiles is it's capability of allowing your body to breath. This comes about because linen is natural and free of allergens which in turn gives you a good chance of achieving a much more relaxing night's sleep.

The ability to absorb the humidity in the air is another of the advantages of such a natural fabric, which comes in very useful in both cold and warmer regions. For that reason, using a linen duvet cover is highly recommended no matter where in the world you are living. High quality linen bedding is a huge step towards helping you achieve a good night’s rest.

Write a Review
Based on 1 review -

I haven't tried it on the bed yet but feels so soft after the first wash, I'm looking forward to sleeping with it.